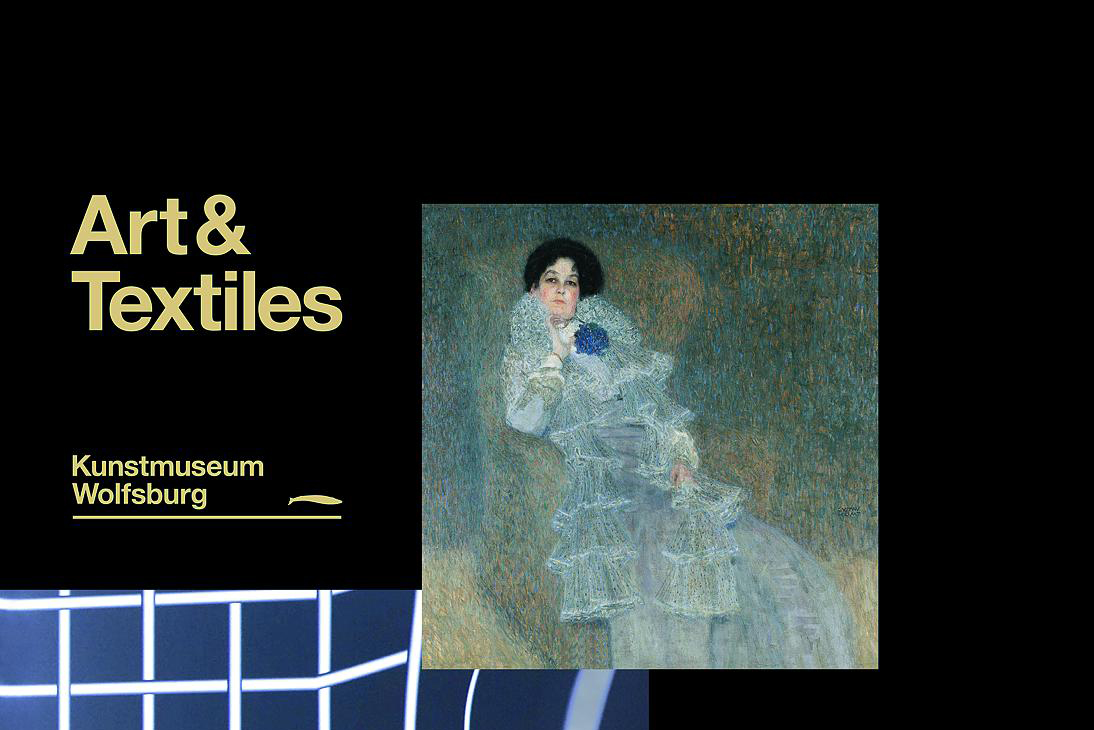 Nothing, no material, no technique is as capable of touching our sensual and mental existence so universally as textiles, particularly at a time that is in danger of becoming ever less sensuous due to increasing virtualization. Textiles with their abundance of weaves and textures that evolved over the millennia are the ideal medium to fulfill this need for sensuality.

The Kunstmuseum Wolfsburg again devotes itself to a central aspect of human life from the perspective of art in a historically far reaching, interdisciplinary multimedia exhibition that encompasses the most diverse cultures. After “Interior/Exterior” in 2008 and “The Art of Deceleration” in 2011, this exhibition represents a further step in the pursuit of modernism in the 21st century that the museum has been undertaking since 2006.

This large-scale exhibition encompasses approximately 200 works by 80 artists as well as 60 further anonymous artists whose names have not been preserved, among them major paintings by Gustav Klimt, Vincent van Gogh, Edgar Degas, Henri Matisse, Paul Klee and Jackson Pollock. But artifacts whose creators’ remain nameless can also be viewed in the circa 2700 square meters large exhibition space, for example a pre-Columbian textile fragment from the collection of Anni Albers.

Our exploration of the significance of the textiles also involves a kind of “re-reading” of the history of modern art from Art Nouveau to the present. The modern separation of applied and fine art resulted in the systematic, decades-long exclusion of all handicrafts from the art historical canon. In the process, modernism drew decisive impulses from the ties between art and craftsmanship.

Those expecting to primarily be confronted with textiles in this exhibition will be surprised. Visitors will not only encounter works of art made out of textiles, for example the typical knitted pictures by Rosemarie Trockel, but also paintings illustrating textiles like the hanging laundry in Edgar Degas’s “Woman Ironing” or the sumptuous Ball-Entrée that envelopes Marie Henneberg in a textile cloud in her portrait by Gustav Klimt (1901). Videos deal with the notion of the textile (Kimsooja) or immerse the viewer in a cosmos of constantly shifting nets (Peter Kogler). Objects are furthermore on show that one otherwise encounters solely in ethnographical museums, for example fine African Kuba cloth.

Its comprehensive approach makes “Art & Textiles” a fundamental exhibition. The origins and complementary supplement can be found in counterpart, the 2001 Ornament and Abstraction exhibition (Fondation Beyeler) that examined the significance of the ornament for the development of abstract art. The intellectual patron of that show was the Viennese art historian Alois Riegl whose universal history of form from 1893 led from humankind’s earliest patterns to the Egyptian lotus motif and the Greek palmette and from there to the arabesque ornament. The thesis of the exhibition was that they can be traced further in abstract art. In doing so, Riegl responded to Gottfried Semper, who in 1863 saw technology and the dealing with material as the origin of forms and symbols. “Form follows material”: This is the formula that can be applied to the    “Art & Textiles” project.

The “Art & Textiles” exhibition begins during the eventful Art Nouveau period when artists and designers such as William Morris and Henry van de Velde in Paris, Brussels, London and Vienna set about breaking down the hierarchy between art and handicraft in favor of a comprehensive life plan. Textile fashioning was also the connecting link to painting that was in the process of becoming abstract after Édouard Vuillard, Henri Matisse and Gustav Klimt. The visitor follows the golden thread of the exhibition to the Bauhaus in the German cities of Weimar and Dessau, where textile design reached an initial highpoint and the foundations for the enfolding of so-called fiber art were laid. But it was less the heralding of a separate art movement that proved fruitful than the ever more self-evident use of textiles as a medium, technique, material and concept in avant-garde art, for example in Material and Anti-Form Art (Eva Hesse), Soft and Pop Art (Sigmar Polke), Fluxus (Joseph Beuys) as well as Minimal Art (Agnes Martin). “Textile Art” itself was long stigmatized as being a mere handicraft and dismissed as a “women’s matter” associated with domestic housework until Rosemarie Trockel produced her first knitted pictures in the early 1980s, reevaluating the cliché of the textile as a gender-specific form of expression. The chapter “Spider Women” is consequently devoted to the most important protagonists of feminist art, including, alongside Trockel, Louise Bourgeois, Mona Hatoum and Ghada Amer. Artists have considerably expanded the textile’s range of meanings since then and present-day art production is virtually interspersed with works made from yarn and fabrics, sewn sculptures and crocheted installations.

But the “textile cosmos” extends far beyond the realm of art, fundamentally bearing on our appropriation of the world. “To be human is to be involved with cloth” says the textile scholar Beverly Gordon. Textiles literally accompany us all our lives, from the diaper to the burial shroud. As Gottfried Semper already determined in 1860, spinning and weaving concern a primal technique from which all the other arts developed. “Civilization first exists,” Hartmut Böhme explains, “when it has mastered the cultural techniques of ‘binding’ and ‘connecting.’” The Jacquard loom, this exemplary archetype of industrialization, introduced the punched card principle, making it a prototype of digital pictorial culture. This highly topical analogy of mechanical weaving and digital processing tempts one to comprehend the World Wide Web as a kind of weaving loom of the Internet age.

The exhibition at the Kunstmuseum Wolfsburg also pursues the question concerning the share of textile techniques in the birth of abstraction. The orthogonal fabric structure of warp and woof finds its equivalent in the rectangular grid pattern that conquered modern painting in the late 1920s (Piet Mondrian). “Art & Textiles” also pays particular attention to the second main occurrence in modern art, namely the exit of painting from the picture into space. The exhibition traces the “thread from the picture into space” based on historical installations in addition to those that have been produced for this occasion (Leonora Tawney, Fred Sandback, Chiaru Shiota, Peter Kogler).

The largest chapter featuring exhibits from Africa, South America, and the Orient is dedicated to the intercultural dialogue. The universality of textiles makes them a kind of world language. “Global Art” that is supposedly no longer oriented on the Western concept of art is being discussed everywhere. But how should it be exhibited by a still Western-oriented art world? Ethnological museums and museums of non-European art, for example the future Humboldtforum in Berlin, must ask themselves this question. The Kunstmuseum Wolfsburg suggests its own presentation model in this exhibition that is based on combining objects from various art historical and cultural contexts.

The Wolfsburg wall system facilitates a versatile staging of the exhibition, and even occasionally becomes an exhibit itself, for instance in the replication of the unique Café Samt & Seide constructed in Berlin in 1927 by Lilly Reich and Mies van der Rohe. 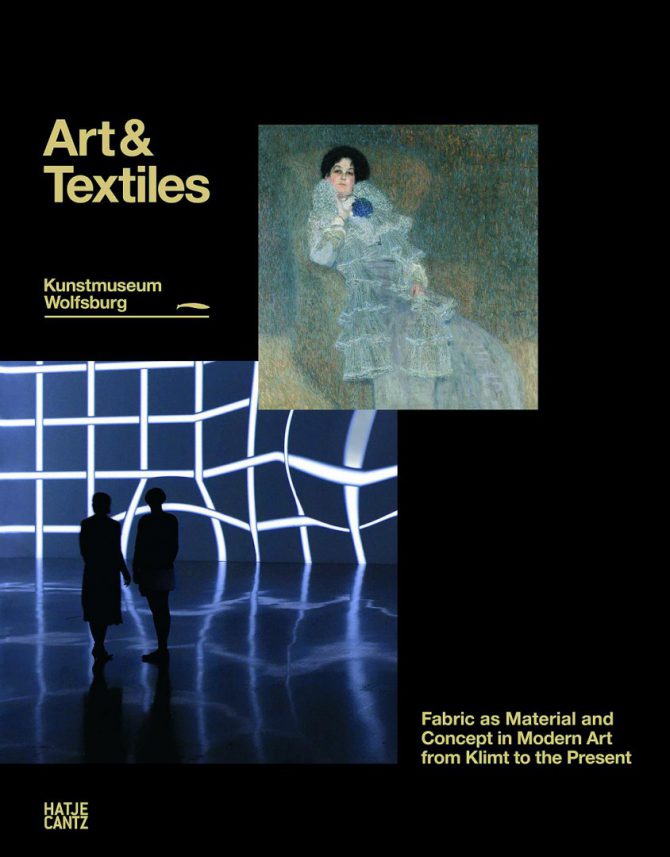